Deprecated Post: My love letter to the JayBird BlueBuds X

When creating my new section, The Elite, I searched for my post about the JayBird BlueBuds and quickly realized I’d never actually posted it on this blog, so here it is.  These headphones are just the best, you guys.

The following was originally posted on The Verge’s forums on November 9th, 2013.

I hate to start posts with disclaimers, but I thought it was important to cover a couple of things right off the bat: I was originally going to call this a “review”, but that’s not really fair, because it’s mostly just me gushing. Enough people have asked me about them, though, that I felt it was worth putting my thoughts down. I will cover the negatives, of course, but I’m not even going to pretend this will be remotely balanced. It’s also important to note that I would never be mistaken for an audiophile – but that probably goes without saying, as I don’t think a true audiophile would be caught dead with Bluetooth headphones. For me, the convenience of wireless headphones has always outweighed any loss in audio quality.

So, with that out of the way – let’s get started.

I listen to music and podcasts basically all the time, so I’m pretty picky about my headphones – I need a pair of headphones that are just as usable and comfortable when I’m sitting at my desk at work as they are when I’m running on the treadmill or walking my dog. They also, preferably, need to last long enough on a charge that I don’t need to stop and charge them halfway through the day – I don’t need to add my headphones to the list of devices whose battery I worry about.

The Motorola S305 headphones used to be my go-to Bluetooth headphones – and I still think they’re a great value for the price – but there were still things that bugged me about them. I lost several pairs to sweat while working out; I actually reached the point where I kept an extra pair around at all times for when I inevitably lost another pair to a workout. They aren’t exactly bulky, but they aren’t super-portable, either – since they’re rigid, you can’t easily put them into a pocket . The first two are deal-breakers for me for many situations; I couldn’t just take them out in public anywhere, and I gave up on trying to use them in any capacity while exercising. Certain devices didn’t get along with them as well as others – most notably my MacBook Air and my Vita. The latter was especially annoying, as I’d really looked forward to having a handheld console that worked with Bluetooth headphones.

So why am I talking about the S305 when this is supposedly a post about the BlueBuds X? Because all my issues with the S305s are a thing of the past. The BlueBuds are small and convenient enough to how with me basically anywhere, yet somehow have a battery life greater than the S305. I seriously believe some sort of dark magic is involved. 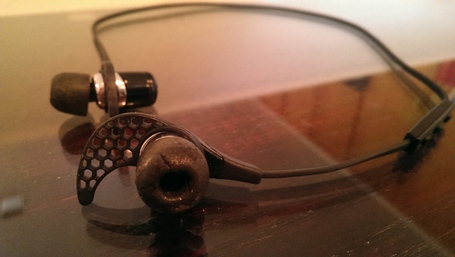 Also unlike the S305, “basically anywhere” thankfully covers my indoor and outdoor runs and bike rides. The Bluebuds have a lifetime warranty against sweat damage, and more dark magic that protects them against the elements:

To further enhance our Lifetime Warranty Against Sweat,
BlueBuds X feature Liquipel Sweat Repellant Nano Technology.
A super hydrophobic process that provides the BlueBuds X with
added protection from exposure to sweat and the elements.

Finally, I’ve yet to find a device that the Bluebuds wouldn’t pair effortlessly with. iPad Mini? Yup. HTC One? Of course. Nexus 7? You know it. PS Vita? Surprisingly great. MacBook? Easy peasy. 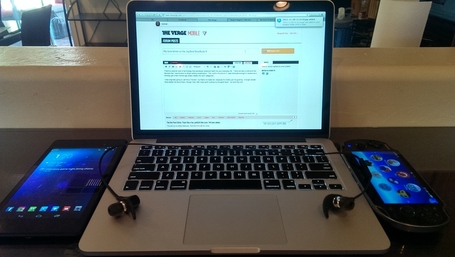 I am constantly switching between devices, so being able to easily change what device my Bluebuds are connected is a pretty big deal to me. I’ve dealt with too many Bluetooth devices – headphones or otherwise – that were a pain to pair with multiple devices, so it’s refreshing to finally have something that Just Works ™ in that regard.

I would also say their range seems better than any other pair of Bluetooth headphones I’ve used. I can go basically anywhere in my (admittedly small) house and retain a connection, without any skipping or degradation of quality. Currently, they’re connected to my Nexus 7, located in the middle of my house, and I went from typing this outside on the patio to upstairs and back again without issue. I can’t ask for much more than that.

The controls are also wisely placed, and so far they’ve worked perfectly with any device I’ve tried. The only complaint I have is that I can only view the device’s battery meter on an iOS device – nothing else seems to support it. My suspicion is that this isn’t a problem with the BlueBuds themselves, though.

I almost didn’t mention it, but in case anyone was curious – on the rare occasion I’ve used the BlueBuds to make or receive a phone phone, they’ve worked fine. Audio quality wasn’t particularly good or particularly bad, and people didn’t seem to have any trouble understanding me. I’m probably not the best person to ask about this, though, as I avoid talking on the phone whenever possible.

Speaking of audio quality – as I mentioned before, I am not an audiophile, so all I can really say is that these headphones sound as good, or better, than any pair of Bluetooth or wired headphones I’ve ever owned. I’ve never owned high-end wired headphones though, so take that for whatever it’s worth. While they don’t have any sort of active noise cancellation, I’ve never had issue with ambient noise overpowering them – much to the dismay of my co-workers when they try to get my attention.

Comfort-wise, I have no complaints – with one important caveat that we’ll get to in the next section – suffice it to say that, more than once, I’ve actually forgotten I had the headphones on. You can wear them either “over ear” or “under ear” – I’ve found I greatly prefer the under ear configuration.

So, about that comfort thing – while the Bluebuds conveniently come with three sizes of earphone tips, my ears just didn’t agree with the silicon material they’re made of. I couldn’t wear them for more than an hour or two at most without needing to take a break. Fortunately, a bit of Google research led me to Comply’s T-500 Isolation Earphone Tips which are relatively-cheap foam-based earphone tips that, essentially, saved the Bluebuds for me.

It’s fair to ask how I can be so positive about a product that required another product before I considered them 100% usable, but I wouldn’t (and don’t) blame JayBird for this – I’m sure there are people who can painlessly use the included earphone tips, I’m just not one of them.

$137.94. While I truly believe you get what you pay for with these headphones, the price can still be a difficult pill to swallow, especially if your use cases for headphones aren’t as broad as mine. If you just want something for work and for using around the house, I think the S305s are still a great choice.

There are precious few devices that I recommend to others without hesitation or qualification, and the BlueBuds managed to slide into that esteemed category almost without me even noticing. I honestly delayed writing this for awhile, largely because I enjoy them so much that it was hard to write anything that wasn’t just BUY THEM BUY THEM BUY THEM. It’s the same reason I don’t review something like my router or my cable modem – because when technology works well enough, you stop consciously thinking about it.

It is no exaggeration to say I rarely leave the house without taking the BlueBuds with me, whether they are in my ears, dangling around my neck, or stashed away in a pocket. It’s a special type of technology that painlessly dissolves itself into your everyday life and, honestly, that’s the highest compliment I can pay to any device.